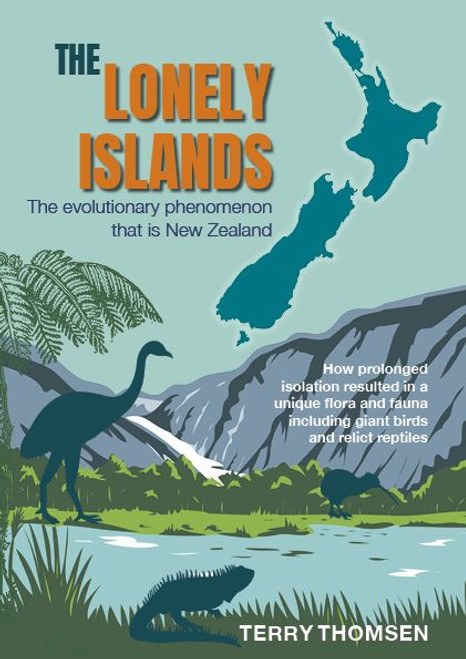 From kiwi to tree fern, and weta to tuatara, this is the story of how animal and plant life came to New Zealand and how they have evolved. It presents a historical perspective on a range of debates and events that changed accepted thinking. Fossil and sub-fossil discoveries, the acceptance of plate tectonic theory, and the advent of DNA analysis all influenced what we now know about the origins and evolution of New Zealand’s life. Author Terry Thomsen’s extensive research has resulted in The Lonely Islands: a fascinating and engaging broad narrative of the pre-human history of the islands. Events in New Zealand are discussed in the context of geological and evolutionary events across the wider world, and how they influenced what organisms arrived in New Zealand and how they survived. Tectonic plate movements, climate change, the end-Cretaceous asteroid impact and the evolution of groups such as flowering plants and birds all had far-reaching impacts. Within these themes, the book explores a wide breadth of life in New Zealand. The subject matter ranges from high-profile organisms such as moa, tuatara and southern beech, to of-ten-neglected creatures such as freshwater fish, pelagic seabirds and soil invertebrates.

The New Rules for Job Hunting

TAUTUA - Memoirs of a Public Servant

Hold the Line: The Springbok Tour of '81, a Family, a Love Affair, a Nation at War

The Nine Lives of Kitty K.: The Unsung Heroine of the Goldfields