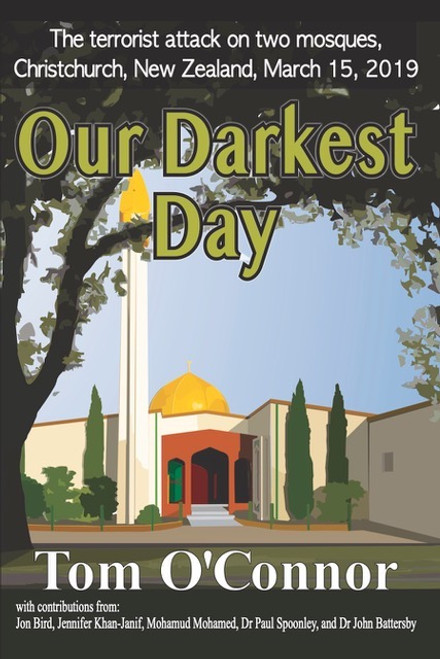 The cold-blooded murder of 51 innocent people and the attempted murder of many others at two mosques in Christchurch, New Zealand, on March 15 2019 sent shivers of horror down the collective spine of the nation. An act of terror such as this was totally unexpected from a white-wing supremacist.

How could we be so naive? This unprecedented atrocity brought the ugly reality of racism, bigotry and religious intolerance in New Zealand into the glare of international scrutiny.

Veteran author, Tom O’Connor, takes a deeper look into the history of religion and conflict as well as measures the nation has taken since the attack. Gun laws were tightened, the ‘Christchurch Call’ was initiated, the Royal Commission made recommendations for further changes to our laws and policies. Will it make a difference?

With contributing chapters by:

Jon Bird – Former British military computer technology expert examines the role of social media in the cause of spreading the impact of terrorism.

Jennifer Khan-Janif and Mohamud Mohamed – Explain the history of Islam, the contribution Muslims have made to New Zealand, and their concerns and aspirations for the future.

Dr Paul Spoonley – from the College of Humanities and Social Sciences at Massey University is an expert in Far Right political groups. He provides an insight into their twisted mindset.

Dr John Battersby – Teaching Fellow in the Centre for Defence and Security Studies at Massey University. He is a specialist on terrorism and a leading academic on ‘radicalisation’ of individuals.

In Our Own Backyard

The Politics of Design

In Hindsight: 50 Years of Deer Farming in New Zealand

ANZAC Nations: The Legacy of Gallipoli in New Zealand and Australia 1965 - 2015

The Modern Singhs: The true story of a marriage of two cultures