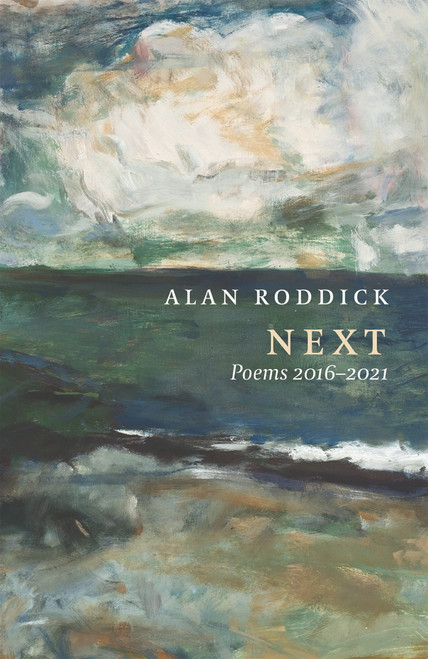 … Between-times, there’s silence to attend to, setting an edge on hearing, for what happens – dokadok-dok, freight wagons heading north; then that diesel thrum, a fishing vessel, and the first truck, changing down, clears its throat. Soon, the city-stir will say Start here as graylight brings Level 2. What happens now? Today. Then today. And then, today. – From ‘At Last – Level 2’ Writing from the eighth and ninth decades of his life, Alan Roddick’s third collection of poetry, Next, examines the past, observes the present and speculates on the future. Anchored in the action of daily life – whether it be a ride in a mirrored elevator or a roadside conversation with a friend – his poems speak of migration, family, friendship, aging and mortality. Next is marked by a rare blend of uncompromising vision and deep compassion. Here is poetry that delights in warmth, humour, wit and grace, that revels in the beauty of the world, that insists on ‘anticrepuscular rays’ at twilight even as it’s asking the niggling question: ‘Tomorrow, though? …’Roddick’s most simple poems are also his most potent. – Elizabeth Morton, in NZ Poetry Yearbook, 2018 AUTHOR Alan Roddick was born in Belfast, Northern Ireland, and emigrated to New Zealand in 1952. He is the literary executor for Charles Brasch and has edited numerous books including Charles Brasch: Selected Poems (OUP, 2015). Next is Roddick’s third book of poetry: his first collection, The Eye Corrects, was published in 1967 and was followed 49 years later with Getting It Right

Maori Made Easy 2: The Next Step in Your Language-Learning Journey

The Olive Tree In My Kitchen