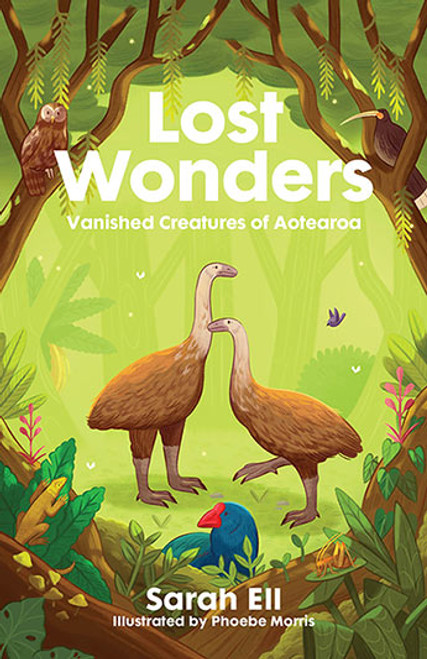 The stories of these fascinating creatures - birds, insects, reptiles and plants - are told in an entertaining and accessible style, drawing on first-hand accounts and supported with useful illustrations. It draws on accounts of their demise, and of the social climate in New Zealand in which these extinctions occurred.

Illustrated with line drawings by Phoebe Morris, and written in a relatable style, this is perfect for 8-12 year olds, telling true stories about the species and the people involved in their extinction and/or recovery.

Featured species include those which are long gone - New Zealand's dinosaurs, penguins and pelicans, and the giant gecko; extinctions since the human habitation of New Zealand, including the moa, piopio, huia and laughing owl, and native fish the grayling; species which were lost and found - the takahe, taiko, Tecomanthe speciosa and the weevils of Canterbury; and those at risk of extinction and how it came to this - kakapo, kaki, Maui's dolphin, kauri and whitebait.

The Dragon Defenders: All is Lost (Book 4)

Lost and Found: A story of heartbreak and hope

The Secrets of Strangers