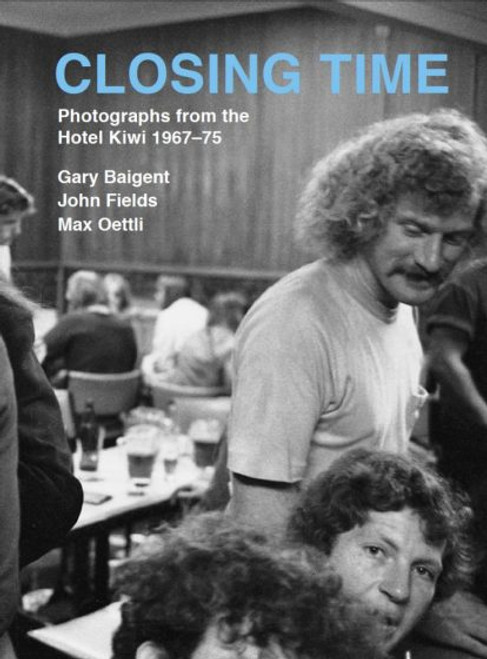 This limited edition zine-style photobook feature the photographs made at the bars of Hotel Kiwi from the archives of three photographers, who have all, in their own way, contributed to the development of early contemporary art photography in New Zealand.

Hotel Kiwi was situated at the corner of Wellesley and Symonds Streets in Auckland – close to the University and the Elam School of Fine Arts. Described in The Pub-Goer’s Guidebook (1966) as “Built almost entirely of formica and rubberised floor tiles, with the whole place giving out a general lavatorial atmosphere, it surely represents all that a pub should not be . . . The only feature of the place that is at all remarkable – and the only reason for giving it a ½ an award are the barmen. They are possibly the best we encountered anywhere.”

Max Oettli found employment as a bartender at Hotel Kiwi after graduating from University of Auckland in the late 1960s. He carried his Leica camera on the job, photographing the varied patrons of the old and new, around the time ‘six o’clock swill’ was scrapped to more civilised 10pm closing. As well as the Hotel being the go-to student bar, artists and photographers – many associated with the art school – frequented the bar and are captured in this booklet. Max is joined by fellow ‘New Photographers’ Gary Baigent and John Fields, (a title coined by Athol McCredie in his exhibition, The New Photography at Te Papa), who photographed their friends and acquaintances at Hotel Kiwi at the time.

This book also features texts by Elizabeth Eastmond, who lectured in the Art History department and Ted Spring, then a student at Elam recollecting their time spent at ‘the Kiwi’, in conjunction with field notes and recollections from the three photographers.

“Here, is the wisdom and failings of age, the impetuosity and rudeness of youth, all jammed into a room, thick with smoke and drumming with noise. Conversations are a spectrum in themselves ranging from worn clichés and small talk to nuclear physics, with plenty of spread thighs and cock jumbled in from both sexes.” From John Fields’ dairy, 21 February 1969.

Taimi Kai = Time to Eat: Recipes from the Pacific

Purple Hands: A Kiwi Nurse-Midwife’s Response in Times of Crisis

Silver Linings: Kiwi Success Stories in the Time of Covid

Around the Corners, Out to the Edges: A Memoir by Composer Jonathan Besser

Taimi Kai = Time to Eat: Recipes from the Pacific

Matariki Around the World