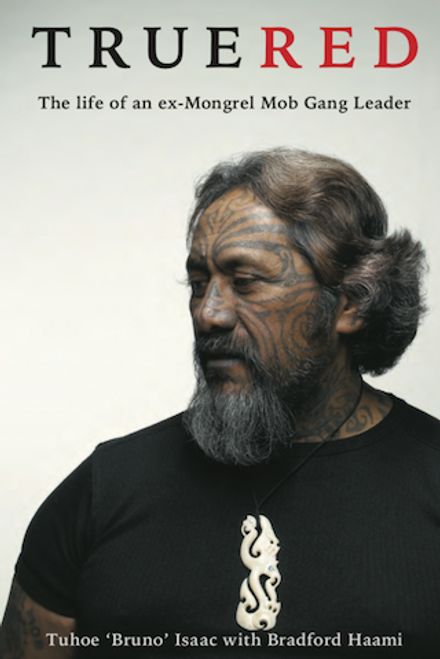 The life of an ex-Mongrel Mob Gang Leader. True Red is the essential biography of one man’s fascinating journey from the realm of darkness into the world of light.

Wearing the colour red, living by the ‘law of lawlessness’ and having the patch with the emblem of the mighty bulldog on your back was what ex-Mongrel Mob leader Tuhoe ‘Bruno’ Isaac called being True Red. “Because all levels of society hated us we created a new society of hatred symbolised by the bulldog. Its ferocious habits were engraved on our hearts,” Tuhoe says, “If you weren’t a mobster you
weren’t worth knowing.” He lived this way for 17 years.

However, constantly living for the bash, beer, prison and the possibility of dying in a pool of blood eventually saw Tuhoe search for another way of doing life. Leaving the Mob was hard. Not only did he face the rejection of his own and the fierce judgemental prejudices of mainstream society, but with the awakening of his conscience came the realisation of a past filled with inflicting pain on others besides himself, and of a life devoid of any sense of love or hope. This led him down a path of confession, forgiveness and reconciliation.

Jacinda Ardern (I Know This to be True)

Being a True Hero

Maori Boy: A Memoir of Childhood

Speak to Me: Home

Tropic of Football: The Remarkable Rise of Samoans in the NFL

The Tree of Life: My Journey of Grief

The Adventures of Kaia the Korora