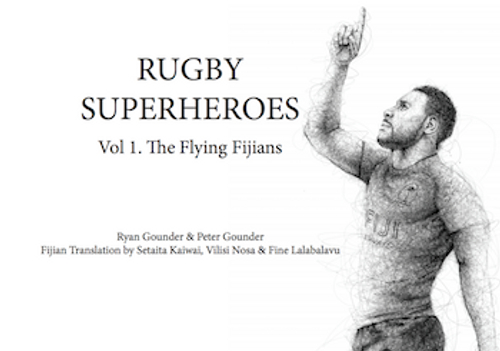 Volume one of Rugby Superheroes is the first in a series of books about Pacific Rugby.  The book explores some unique characteristics of Fiji Rugby.  This book is designed to be read by both adults and children.

Over thirty hand drawn illustrations are meant as an aid for an adult to adjust and embellish the stories for the children's level of comprehension and also to learn about Fiji, and in particular, the values that Fijians hold dear.

The first story is about Ratu Joseva Levula, the ‘Original Flying Fijian’, racing a horse which illustrates having a can-do attitude.  The second story is about Sevuloni Mocenacagi single-handedly outjumping Ben Pinkelman and Danny Barrett of the USA Sevens team, which illustrates the concept of an ‘8th man’.  The third story explores the confidence and poise of Osea Kolinisau, Captain Fantastic of the Fiji Sevens team that won a Gold Medal at the Rio Olympic Games. The fourth and fifth stories are about the coaches of Fiji Rugby, Brad Johnstone and Gareth Baber, illustrating the virtues of being greatly enthusiastic, hungry for knowledge and humility.  The sixth is about Jerry Tuwai and Apenisa Cakaubalavu being the ‘salt of the earth’.  The seventh story is about Naca Cawanibuka, who describes himself as ‘a small cog’ but in reality, it illustrates that ‘limited resources’ can be overcome and you can be the best-in-the-world despite the lack of material things.  The final story is on Jerry Tuwai, representing hope

A Separate Authority (He Mana Motuhake), Volume I