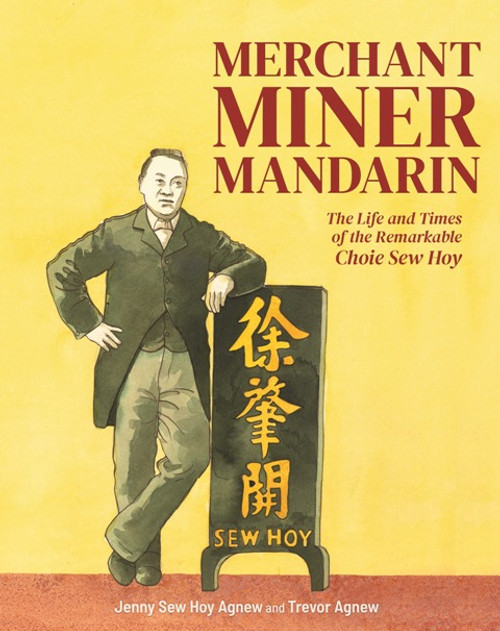 In 1869, a businessman from China’s Guangdong Province first set foot on New Zealand soil at Port Chalmers. It was the beginning of an illustrious career that would change the shape of commerce and industry in Otago and Southland.

‘Merchant, Miner, Mandarin’ depicts the fascinating life of Choie Sew Hoy – from his early days in China before emigrating to Australia and then New Zealand, to his death in 1901 as one of Dunedin’s most prominent entrepreneurs. The store Choie Sew Hoy established in Dunedin’s Stafford Street was a huge success, while his revolutionary gold-dredging technology improved the fortunes of the gold-mining industry in Otago and Southland. He backed dredging, quartz crushing and hydraulic sluicing ventures in the goldfields of Ophir, Macetown, Skippers, Nokomai and the Shotover. Sharp as a razor, Sew Hoy was a visionary, able to spot opportunities no one else could, whether sending vast amounts of unwanted scrap metal from New Zealand back to China, or joining famous Taranaki businessman Chew Chong’s fungus export trade.

Sew Hoy was also a local character, always elegantly dressed and with legendary success in horse racing. His self-assurance and charm gained him entry to the Chamber of Commerce, the Jockey Club, the Masons and even the Caledonian Society. A benefactor to many social causes, he supported hospitals and benevolent associations to help his fellow Chinese immigrants. When the success of the Chinese in New Zealand aroused hostility, he fought the prevalent racism and unfair government legislation of the day. A man of two worlds, Choie Sew Hoy was a success in both.

Richly illustrated and deeply researched, ‘Merchant, Miner, Mandarin’ is both the compelling biography of one of the most distinguished figures of New Zealand business and an intriguing account of late 19th-century society, industry and race relations.

Rush to Riches: Kauri and Gold

Tropic of Football: The Remarkable Rise of Samoans in the NFL

Constant Radical: The Life and Times of Sue Bradford

Abigail and the Restless Raindrop

The Gift of Words