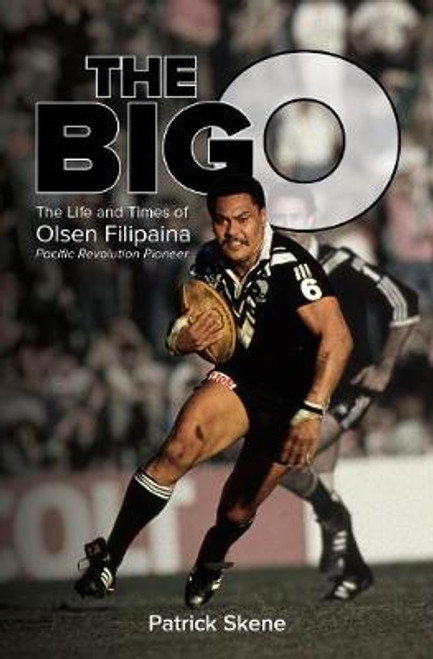 The Big O by Patrick Skene is the story of Olsen Filipaina, a New Zealand Hall of Fame rugby league legend who was a pathfinder for the Maori and Pasifika players who today dominate the Australian National Rugby League. In a career that saw him play 29 Tests for New Zealand and more than 100 first grade NSWRL games, Filipaina was an object of fascination for the rugby league community.

To fans he was "the Galloping Garbo", a working-class hero who thrilled crowds in between shifts as a garbageman. To opponents, who feared his Polynesian power game, he was The Big O. To coaches and critics, he was simply "Olsen the enigma". Featured in the book are some of the pivotal figures of 1980s Australia and New Zealand sport including Sir Graham Lowe, Arthur Beetson, Roy Masters, Sir Peter Leitch, David Tua, Sir Bryan Williams, Wayne Pearce, Sir Michael Jones, John Ribot, Mark Graham, David Lange and NRL Immortal Wally Lewis who for the first time opens up about being outplayed by Filipaina in the 1985 Test series.

The Big O tracks Olsen's story from his rise out of working-class South Auckland, to overcoming depression, racism and cultural dislocation in Sydney, to the Cinderella story of his success for the New Zealand Kiwis. Forty years after Filipaina burst into Australian rugby league, Skene relates the tale of a humble and principled man, a dynamic and magical pioneer of the 'Pacific Revolution'. The Big O' is a timely story of resilience, redemption, bravery and love.

To understand Olsen's story is to understand the cultural changes that have reshaped the game of rugby league.

Place for the Heart: The Life and Times of Dave Comer, Photographer and location scout

Constant Radical: The Life and Times of Sue Bradford

The Book of Overthinking

Taking the Lead: How Jacinda Ardern Wowed the World